Shoshana Friedman insists she didn’t choose her field. It chose her.

A computer science and math major in college, she never intended on becoming managing editor of Mishpacha magazine, a popular weekly in the Orthodox world. But the signs were there nonetheless.

Friedman realized early on that she had a knack for perfecting the written word. Her high school friends counted on her to review and correct their writing assignments before handing them in. She never imagined it would become her career.

After she married and moved to Eretz Yisrael, she put the word out that she needed a job. She heard that Jonathan Rosenblum, a noted author and journalist, needed a secretary and applied for the job. Rosenblum soon picked up on her eye for editing and began running all of his articles by her, saying, “Okay, mark it up!”

In 2004, Eli Paley, Mishpacha’s publisher, decided to launch an English version of the Hebrew-language magazine. He needed someone not only well-versed in both languages, but someone who could take the content and make it relevant to an Anglo audience. He asked Rosenblum if he could recommend someone. The choice was obvious. 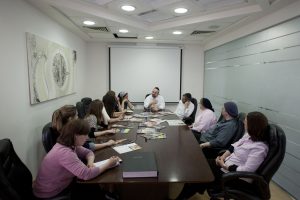 Staff of the English edition of the weekly magazine Mishpacha gather during a meeting at the Mishpacha office in Jerusalem. Photo: AP Photo/Bernat Armangue

Impressed with what he calls her “sophisticated and analytic” approach, as well as her ability to extract spot-on material for an English-speaking readership, Paley welcomed Friedman onto the editorial board. With her unassuming yet self-assured manner, she became a key decision-maker. She started overseeing the magazine’s layout, coming up with ideas for original features and guiding the writers.

When the former managing editor left in 2009, she assumed the position.

“She never wanted this,” says Paley. “She prefers to work behind the scenes, letting others get the credit.”

But Mishpacha needed her. And she believed in its vision.

“It’s a voice of sanity for Chareidi society,” says Friedman. “Without a specific political agenda, the magazine celebrates all the positive aspects of our community and discusses the not-yet-perfect aspects—in a respectful forum where there’s back and forth between the publication, its contributors and readers.”

Is there a bright future for frum women interested in Jewish journalism?
Friedman believes there is.

The English-language Mishpacha readership includes men and women from across the Orthodox spectrum. Friedman sees it as a powerful medium connecting Jews around the world, and a venue to opening up discussion on the difficult issues affecting the community. Mishpacha articles have prompted off-line support groups as well as a Facebook group that regularly weighs in on the weekly.

The writers attribute the appeal of their articles to the editor at the helm.

“She makes us all look good,” says Yisroel Besser, columnist and contributing editor. “I [actually] welcome her criticism. If she doesn’t give any, I’m disappointed. I know she wants to make us shine. But when she says, ‘Lovely,’ you feel great.”

According to Barbara Bensoussan, contributing editor, Friedman’s “calm, rational” nature serves her well as the editor of a publication that sometimes deals with sensitive topics. Not to mention a boardroom of men.

“She’s an expert at being a woman in a ‘man’s world,’” says Besser. “There could be fifteen to twenty men around the table. With a lot of talented, creative people there are going to be disagreements. She never pushes herself; she doesn’t say much. But when she does, everyone listens. Ultimately, [the decision-making] comes down to—what does Shoshana think?”

Friedman asserts that many of the skills essential to being an effective manager come naturally to her as a woman, such as prioritizing, compartmentalizing and interacting with diverse personalities. Still, balancing home and work isn’t always easy, especially in the winter when her children are “taking turns with the same flu.” 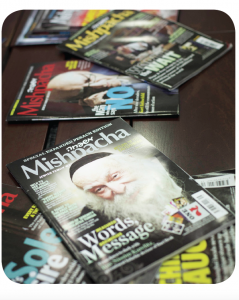 “It’s definitely a challenge,” she says. “I made a decision to put my family first. If a child is sick or there’s a graduation, I make up the work on my own time. I appreciate [the fact] that I work in a culture that respects that.”

Friedman is not one to sit on her laurels.

“She will often say, ‘Even if our readers are perfectly happy with the status quo of the magazine, we need to constantly update it,’” says Bassi Gruen, managing editor of Family First, a Jewish women’s magazine that accompanies every issue of Mishpacha. “It’s not—‘Okay, everything’s good, so let me get some sleep.’ If she thinks a topic is getting slightly stale or tired, it’s ‘Okay, let’s revamp!’ She’s constantly pushing for more interesting, more innovative.”

True to that objective, Friedman speaks of plans in the works to modernize the presentation of the magazine for the next decade of readers, aiming “to remain relevant and compelling to a generation that consumes information differently.”

Is there a bright future for frum women interested in Jewish journalism? Friedman believes there is and mentions that a large percentage of Mishpacha’s writers and editors are female. She maintains that the typical young women coming out of the Orthodox school system would fare better in the field than their male counterparts.

“[In general], these women are better read and have stronger writing skills. Any one of them who is open to honing her craft could go very far.”