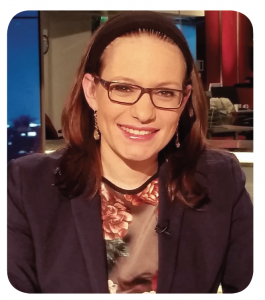 The trendiest place to be every Wednesday night in Jerusalem is not a ‘60s Anglo bar or a rock concert, but the packed hall of Hechal Shlomo, where journalist Sivan Rahav-Meir expounds on the weekly Torah portion, flowing freely between Ramban and Rabbi Nachman of Breslov, Rabbi Samson Raphael Hirsch and Rav Avraham Yitzchak HaCohen Kook, peppering the class with stories from her life and from the lives of others. She gives the same shiur every week at the trendy Tel Aviv Port, reaching more than 1,000 people between the two locations. Religious and secular men and women sit together.

Rahav-Meir’s best-selling book on the weekly Torah portion, HaStatus HaYehudi (The Jewish Status), was published in Hebrew by Yediot Aharonot in 2016. The English version, #Parasha: Weekly Insights from a Leading Israeli Journalist, published by Menorah, an imprint of Koren Publishers, hit bookstores in August 2017, and is already being purchased by throngs of Anglo readers.

Rahav-Meir is an anomaly. I first noticed her more than twelve years ago, when I was covering a Gush Katif session at the High Court of Justice and saw a young woman dressed modestly, with her trademark headband wig, sitting in the press booth. She had already made a name for herself as a journalist, beginning by interviewing her classmates at the age of six, and having a children’s press card by eight. She tried to get into the Demjanjuk trial with that press card at the age of ten (without success). As a teenager, she interviewed Yitzhak Rabin and Shimon Peres.

The hardest thing for me as a journalist is covering religion, because the media assumes that Judaism is a problem.

Raised by an affluent family in Herzliya, identified as gifted early on, she graduated high school at sixteen and completed her BA at the age of eighteen in political science and management. It was during her teen years that she began reading more about Judaism. She was a soldier in Galei Zahal (Army Radio), when she met her future husband, Yedidya Meir, at a colleague’s Saturday night birthday party that had been rescheduled to accommodate her and Yedidya, the two Sabbath observers, she told a reporter.

Rahav-Meir is the first religious female to make a name for herself in the secular media. She is a primetime anchor on Channel 2 News; has a column in Israel’s largest newspaper, Yediot Aharonot; and has a weekly radio show on Galei Zahal, her old stomping ground. She has presided over major national events, such as the torch lighting on Independence Day. She shares a Friday radio show with her husband, and Yedidya also broadcasts from the religious station Radio Kol Chai. Interviewed a few years ago on Channel Two, she called their work relationship a close partnership, in which they review each other’s columns and discuss ideas and show concepts.

Among the most difficult stories to cover, she says, are trials of prominent members of Israeli society. “Seeing a president of Israel, or a former prime minister, go to jail. Although you cover it [because] ‘Wow, it’s exclusive,’ you feel badly. [On the positive side,] I’ve covered very meaningful funerals—Ariel Sharon, Shimon Peres, Rav Ovadia Yosef, Arik Einstein (the famous singer) . . . I like to report on things that have a touch of destiny. And I’ve had the privilege of interviewing many people I think of as holy—families of the terror victims, whose stories I cover a lot, unfortunately. You have to go to the shivah and speak to people. It’s a tragedy, but sometimes it’s the only chance to bring such messages to prime time.”

When asked to recall the most fascinating interview she’s conducted, Rahav-Meir replies, “I’m still looking for it.”

As a rare Orthodox Jew in the secular Israeli media, Rahav-Meir has experienced her share of dilemmas when the ideologies of her two worlds collide. 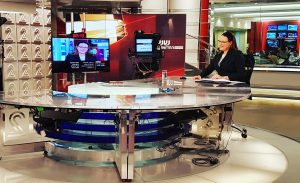 “I think the hardest thing for me as a journalist is covering religion, because the media assumes that Judaism is a problem,” she says. “The media is seeking instances where religion is excessive, extreme. As if we have to ‘solve’ it somehow. It took me a few years to understand that I’m playing the wrong game because I think Judaism is a solution, not a problem. I can’t wake up [and look for] a settler or the ultra-Orthodox or a rabbi who is not politically correct enough for the media [to lambast]. So I stopped [working on those kinds of stories.]

“[I’ve also had to counter the mindset that] if you come from the Orthodox sector, you’re suspected of not being objective. Supposedly, if you’re a secular Ashkenazi left-wing journalist from Tel Aviv, you’re objective. [But really] there’s no such thing as an objective journalist—we all have our opinions. [When] people insinuate, ‘Hey, that’s your own point of view,’ I reply that what they are saying is not Torah mi’Sinai, it’s not an eternal truth either, it’s also their point of view. There are many points of view here.

“I think the media doesn’t cover the real things that are happening,” continues Rahav-Meir. “Take Selichot, for example. Every year 100,000 people come to the Kotel for the last night of Selichot. The Kotel plaza is full [but it’s not covered in the news]. [And yet,] when an old band comes to sing in Ramat Gan’s park and draws 1,000 or 10,000 people, the media will livestream the event and all the reporters will be there. I think Selichot is a mega event. We should be there live with the studio. That’s one example, but I’ve seen it many times.”

Though her career as a TV and radio personality continues, Rahav-Meir’s parashah class is her passion now. She says that two things changed that engendered this metamorphosis, this new mission in life, that manifests itself in her classes and columns and on social media. First of all, the media works differently today, she says. During the years that she covered the Supreme Court, the Knesset and politics, people would wait for the news at night [to find out the day’s news.] But today everyone knows everything immediately, so there is less of a challenge to bring the information to the public, she says. And something else happened. 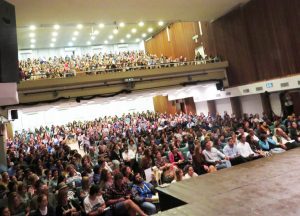 Her children, she says, constantly propel her forward, and this current, most dramatic change is no exception. “Our fifth child was born. Every time one of the kids was born I used to pause to rethink my job. Four times I had changed something, a specific area or an issue that I covered. Now, with the birth of my fifth child, I wanted a real change. I said to myself, ‘I don’t want to wake up and leave five gorgeous kids at home in order to run and see what some politician has to say. I want to do something that’s more meaningful.’ And I saw that there’s not enough Torah in the new media areas. Twitter, Instagram, WhatsApp, Facebook—everything is there, except for the Torah. Rashi is not on Facebook. And neither is the Rambam or the Baal Shem Tov or Rabbi Saadia Gaon.

“So I decided to use our high ratings to put these [commentators] there. I’ve had a very popular Facebook page for two years but now, since my shiur, it’s even more popular. I try to reach one million people every week. We have 135,000 followers. And on Twitter, I have more than 110,000 followers. We have a daily WhatsApp in Hebrew and English that sends out short stories and items, because the queen of all applications in Israel is WhatsApp. We have almost 20,000 official subscribers, but there are a lot more who pass these messages on, so we have no idea how many people we are really reaching. Sometimes my writing will show up in a WhatsApp group of kindergarten mothers an hour or two after I write it. It’s funny when that happens. But,” she adds, “I’m not [teaching Torah this way] lechatchila. Torah [cannot be studied seriously] in cute, short posts; it’s only a way to taste Torah. [Hopefully], then people will want to learn more.”

If the numbers at her weekly shiurim are anything to go by, people do want to learn more. For Rahav-Meir, preparing her shiurim is an all-encompassing activity. “It takes me a whole week, 24/7, to prepare for a Torah class, because I think about it all the time. I prepare by reading, and I think about the shiur even when I’m listening to the news; I can be driving and I hear something on the radio and it gives me an idea. Everything is connected.”

One woman who has been coming to the shiur for years says, “Most people are totally addicted to her shiur. The hour flies; I never look at my watch. Every erev Shabbat I quote something from what she taught that week. And every day I read her WhatsApp divrei Torah.”

Rashi is not on Facebook. And neither is the Rambam or the Baal Shem Tov or Rabbi Saadia Gaon.

Rahav-Meir’s short posts on WhatsApp and Facebook form the basis of the Hebrew version of the book. Her posts draw attention to interesting news topics and connect them to the weekly Torah portion. “For me it’s a great privilege to publish this book in the US,” she says. Many Anglos attend her shiur, including lone soldiers. Rahav-Meir just returned from lecturing in Los Angeles, New York and Washington before 3,000 people at a convention of a large Jewish organization. 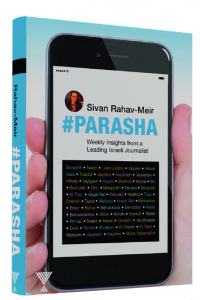 #Parasha, the English version of HaStatus HaYehudi, the best-selling Hebrew book on the weekly parashah by Sivan Rahav-Meir.

When I took her book, not knowing where to begin, I turned to Parashat Pinchas, which includes the story of the daughters of Tzelafchad. The first thing that caught my eye was the name she gave to the topic: “Men are from the Desert, Women are from the Land of Israel,” a parody reference to Dr. John Gray’s book, Men are from Mars, Women are from Venus. The title is based upon Rashi, who says that the women were not included in the decree after the sin of the spies because they cherished the land, as well as on the Kli Yakar, who says that had Moshe sent women as spies, instead of men, they would have brought back an optimistic report. Rahav-Meir succeeded in compacting a rich and intense topic into a few pages. As I read other sections of the book, I saw that this is her method—deep ideas are presented in a way that caters to the general public, just as journalists have learned to convey information in the most compact and compelling way. Nevertheless, even those who have studied Torah extensively will find the book hard to put down, as it is filled with pearls of wisdom, drawing from Torah scholars and Jewish history through the ages to the present time.

I wait every day for Rahav-Meir’s WhatsApp notes. They are always filled with Torah, hope and joy. On the third of Elul this year, the yarhtzeit of Rav Kook, she quoted his words, “One feels the beauty of the world only according to the measure of beauty that is in the inner core of one’s soul.” Her mission now appears to be the juxtaposing of one’s inner beauty with the beauty of Torah.

5 1 vote
Article Rating
This article was featured in the Winter 2017 issue of Jewish Action.