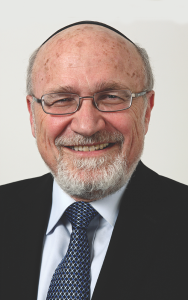 I became involved with OU Kosher in 1980 when Rabbi Genack first came to the OU. He was asked by Rabbi Julius Berman and Shimmy Kwestel to run OU Kosher; however, he had no background in running an organization. I was friendly with Rabbi Genack, and he asked me to help him out.

I believe OU Kosher would not have been successful without Rabbi Genack. He is a talmid chacham who is recognized by the world of kosher as the expert. I once went with Rabbi Genack to meet with Rabbi Shmuel Berenbaum, zt”l, the former rosh yeshivah of the Mir Yeshiva in Brooklyn. We were given an appointment close to midnight. When we arrived, the rosh yeshivah was reclining, and he stood up for Rabbi Genack. We had gone to consult with him regarding a controversy involving the kashrut of a certain fish. For the first half hour, he discussed Rabbi Genack’s sefer with him. Then, for about twelve minutes, they discussed the problem. Ultimately, Rabbi Berenbaum said: “Whatever you say is correct.”

OU Kosher experienced tremendous growth during my years there. This was largely due to the leadership of Rabbi Genack and Rabbi Elefant. Rabbi Elefant plays a critical role. He is practical, sensible, and a talmid chacham.

Another contributing factor to this remarkable growth was the supportiveness of all the presidents of the OU. They understood that kashrut needed to be separate from the OU’s other programs. All they wanted was quality, quality, quality. This allowed Rabbi Genack to delegate and build OU Kosher, creating true expertise in the field.

The OU became the premiere source of knowledge on kashrut for the entire Jewish community. Rabbi Yaakov Luban worked to standardize piskei halachah. He codified everything—kashrut standards for restaurants, for catering, for vegetables. He clarified and created consensus. Rabbi Yosef Grossman, z”l, was in charge of OU Kosher’s educational arm. His ASK OU program continues to bring rabbanim, semichah students and lay people to learn about kashrut—at no cost. We also send OU rabbis to serve as consultants to local kashrut vaadim (kosher councils) in communities around the county. Why do we do all this? To ensure high standards in the world of kosher supervision.

The OU became the premiere source of knowledge on kashrut for the entire Jewish community.

I remember one day we had two meetings. In the morning, we met with more than thirty Conservative rabbis in the kitchen of a catering facility. They had asked for the meeting for their own education. It was a fantastic session. In the afternoon, we were in Kiryas Joel, reviewing a Satmar chicken operation. That day stands out as a highlight for me. The two meetings were just so different, but the OU was there playing a critical role.