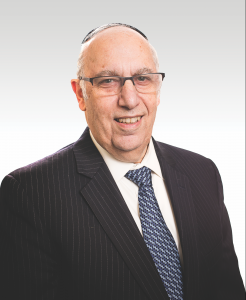 The mission of OU Kosher is to make sure there is kosher food available for the Jewish community at a high standard. We view it as a vital service to the community, like everything else we do at the OU. However, for everything else—NCSY, Yachad, OU-JLIC, Jewish Action, Synagogue Initiatives, et cetera—we spend money. The brilliance of the kashrut system is that companies pay us so they can become kosher because it’s in their best interest as a way to increase their sales; manufacturers and supermarkets believe kosher sells better. So there is no cost to the Jewish community to have kosher products that are widely available.

In 1994, I was a member of the Kashrut Commission when the OU gave kosher certification to Hershey’s. It was a seminal moment. The significance of such an iconic brand taking that step put kosher on the map; it was noticed among other food manufacturers. These days, most products that can be kosher are kosher. Back then, there were few kosher foods available nationwide. It needed to be these major companies that took the lead.

I’d say one driver in the growth of kashrut was the movement away from ingredients made from meat products, like lard, to vegetable products, due to growing health concerns. That trend meant that many other products could become kosher. In the 1990s, Nabisco, the maker of Oreos, switched from using animal fat to partially hydrogenated vegetable oil.

In 1994, I was a member of the Kashrut Commission when the OU gave kosher certification to Hershey’s. It was a seminal moment.