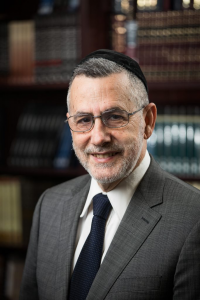 Rabbi Menachem Genack, has served as CEO of OU Kosher since 1980.

When I came to the OU in 1980, there was no one else working full time as rabbinic staff at OU Kosher headquarters (then known as the OU Kashruth Division). There was one rabbi working part time in the office, and I was the only full-time rabbi. Rabbi Julius Berman, Esq., was then president of the Kashrut Commission and he helped in all our endeavors. We started to hire more people so we could create a structure that would both strengthen kashrut oversight and allow us to grow.

Our idea was to bring on rabbinic coordinators who would be responsible for different industries and become experts in those areas—meat, fish, fowl, wine, dairies, bakeries, flavors, et cetera. I also wanted to create a pyramid, with senior rabbinic coordinators (RCs) overseeing others, to construct multiple layers of oversight. Over time we grew, and today we have more than fifty RCs in the national office who oversee 850 mashgichim or rabbinic field representatives (RFRs) across the globe.

Another development we oversaw was the introduction of OU Kosher halachic advisors. The RCA’s Kashrut Commission, a committee of RCA rabbis, used to work in partnership with OU Kosher—it was known as the Joint Kashruth Commission. They would meet once or twice a month to discuss kashrut issues that arose. [This is not to be confused with the Kashrut Commission, a lay board of senior OU officers who volunteer their time to interact with staff and help decide non-halachic policy matters.] With the growth of the OU, I realized we needed on-site halachic consultants. With the approval of the RCA, we brought Rav Hershel Schachter, shlita, rosh yeshivah at Yeshiva University, and subsequently Rav Yisroel Belsky, zt”l, rosh yeshivah at Torah Vodaath, to serve as our senior posekim. Rav Schachter, Rav Belsky and I would meet regularly to discuss halachic issues that arose. Today, our halachic advisors are Rav Schachter; Rav Asher Weiss, rosh kollel of Machon Minchat Asher in Yerushalayim; and Rav Mordechai Gross, av beit din of the Chanichei Hayeshivot community in Bnei Brak.

Rabbi Yaakov Luban, executive RC, was one of the first to join our expanding staff. He wrote a memo at the time that greatly helped in envisioning and creating the structure of the OU. Our New Companies Department, headed by Rabbi Donneal Epstein and Rabbi Nachum Rabinowitz, is another development that has contributed to the OU’s growth. And our Flavor Department, headed by Rabbi Moshe Zywica, deals with the largest flavor manufacturers all over the world, which is a crucial area of kashrut.

Among my interviews of the various people we hired at OU Kosher, one that stands out in my mind was that with Rabbi Moshe Elefant, now chief operating officer of OU Kosher. He had just written a sefer on hilchot yichud, and I remember how impressed I was with him. Over the last thirty-five years, Rabbi Elefant has consistently proven that my initial impression
was correct.

When I joined the OU, I was a rosh kollel at Touro College. I recognized the need for someone who understood the business side of kashrut and asked Dr. Simcha Katz, a professor of business at Baruch College (who later became president of the OU), to join the OU to help with the professional and business side of OU Kosher.

As the world turned to computerization, we brought in a top IT professional, Sam Davidovics, who served as chief information officer and helped create the software for the OU’s Ingredient Approval Registry, a database with more than 2.4 million products. Our database includes both OU-certified products and products certified by other kosher certification agencies that have been assessed and approved by the OU. The ingredients are classified by kashrut sensitivity— some require hashgachah temidit (constant supervision); some require less intense scrutiny. That information represents an enormous resource, the very lifeblood of kosher certification. Our knowledge of these ingredients serves as the foundation of all kashrut all over the world.

Since I came to the OU, the world has changed. With the rise of the global economy, companies buy ingredients from all over the world. This has led to an enormous explosion in the kashrut business.

In 2017, OU Kosher invited the Novominsker Rebbe, Rabbi Yaakov Perlow, zt”l, to deliver the keynote address at its annual mashgichim conference. Rabbi Perlow opened his speech by thanking the OU and stating how happy he was to be there. The extraordinary growth of the Torah community in America, he said, was attributable in many ways to the efforts of the OU. Chazal tell us that a forbidden food “metamtem et halev,” causes one’s heart to become spiritually insensitive. Because the OU made kosher food so widely available and accessible, he said, Torah was able to flourish in America.

Over time, the OU continued to grow. Rabbi Yerachmiel Morrison heads our Ingredient Department. He also serves as the RC for Coca-Cola, whose formula is a closely guarded secret, disclosed only on a need-to-know basis. Once, a senior vice president of Coca- Cola was visiting the OU and wanted to talk to Rabbi Morrison about an issue involving the formula. Rabbi Morrison told the VP that he could not discuss it unless Coca-Cola headquarters in Atlanta granted him permission. They contacted headquarters, and Rabbi Morrison was told that he, in fact, could not discuss it.

Another initiative we started at the OU was Mesorah, a Hebrew Torah journal, which Rabbi Schachter and I edit, that consists of two components: one section is devoted to halachic issues in kashrut, and the other is dedicated to the shiurim of Rav Yosef Dov Soloveitchik. Before we began the journal, we obtained the Rav’s permission to publish his shiurim, and we have continued it to this day.

Since I came to the OU, the world has changed. With the rise of the global economy, companies buy ingredients from all over the world. This has led to an enormous explosion in the kashrut business. We now supervise over one million products in 14,000 facilities in over 100 countries throughout the globe.

Many years ago, McCormick & Company, one of the biggest spice manufacturers in the world, applied for OU certification. At the time, it was under a different kosher supervision. The head of that certifying agency said it would be hasagat gevul [encroaching on their boundaries, i.e., their business] for us to give McCormick certification. I asked Rav Soloveitchik what to do. He told me that companies have the right to choose which agency certifies them. But, he added, that he didn’t ever want to see the OU become a monopoly, because that wouldn’t be a good thing for the Jewish community in America. I live by that idea. We gladly accept the kashrut of other agencies if it meets our standards. This has only helped further the growth of the OU and allowed us to build relationships throughout the world. The OU has close relationships with the Chief Rabbinate of Israel as well as with Satmar and the Badatz. In fact, almost every shechitah in the US is certified by the OU—in addition to whatever other certification it may have.

One of the first contracts I signed after coming to the OU was with Entenmann’s, which has since become a staple of many a kiddush. The head of the company asked me exactly how many kosher consumers there were. I told him I couldn’t answer that question, but that after certifying Entenmann’s the number would definitely increase!

****
We continue to face contemporary issues as new challenges and new technologies arise. Synthetic meat is probably the best known of these issues. What is the halachic status of meat grown from DNA? We spend a lot of time exploring these issues, and we’ve developed significant expertise in the interface between technology and halachah.

Several factors set OU Kosher apart. First of all, we are a bonafide nonprofit organization. Simply put, there is no financial motivation in any decision we make. Whatever funds come in are reinvested in the Jewish people. Secondly, we have an impressive staff of high-caliber RCs. Thirdly, we are driven by a sense of communal responsibility. We recognize our mission is not only to make more food kosher and accessible to the broad Jewish community but also to educate the community. Rabbi Yosef Grossman, zt”l, pioneered our ASK OU program, which offers training to expand knowledge in areas of kashrut— not for our mashgichim but for school children, college students, community members and just about anyone. OU Kosher serves as a tremendous public resource.

When I came to the OU, my predecessor, Rabbi Yacov Lipschutz, told me what Rav Soloveitchik had told him: The presence of an OU certification mark attests to the vitality of the Jewish community in the US. The OU’s success in making kosher food— with a high standard of kashrut—widely available and accessible is the very foundation upon which the Orthodox community was built.