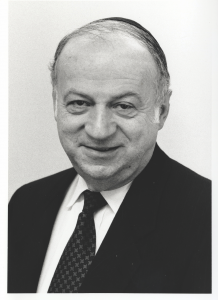 I joined the OU when Nathan K. Gross, who was known as “Mr. Kashrus,” asked me to serve with him on the Kashrut Commission. At the time, OU Kosher was basically a one-man operation. It was directed by Rabbi Alexander Rosenberg, a”h, who ran it like the German Jew he was. He ran the show from beginning to end, and nobody really conflicted with his views on anything.

When it comes to kashrut, the main thing to keep in mind is that we should never have a situation where any individual company is so important to us that we feel the need to lower our standards or make accommodations. I’ll tell you a story. When Coca-Cola was seeking OU certification in 1990, we faced a unique problem. We asked the company, as we request from all companies, for a list of ingredients. Coca Cola was reluctant. “We can’t give out our recipe,” they claimed. “It’s a $2 billion investment!” We told them we can’t certify a product if we can’t review all of the ingredients and be assured of their kashrut. We then came up with a novel idea: the company would give us a list with more ingredients than they actually use, as long as it included all the possibilities. And so we were able to resolve the issue.

Over the years, the growth of kashrut has been incredible. The burgeoning of the kosher food industry developed to such an extent that today when I walk into a supermarket, it’s actually difficult to find something that’s not kosher. That’s a far cry from how it was when I was growing up.

Today when I walk into a supermarket, it’s actually difficult to find something that’s not kosher. That’s a far cry from how it was when I was growing up.