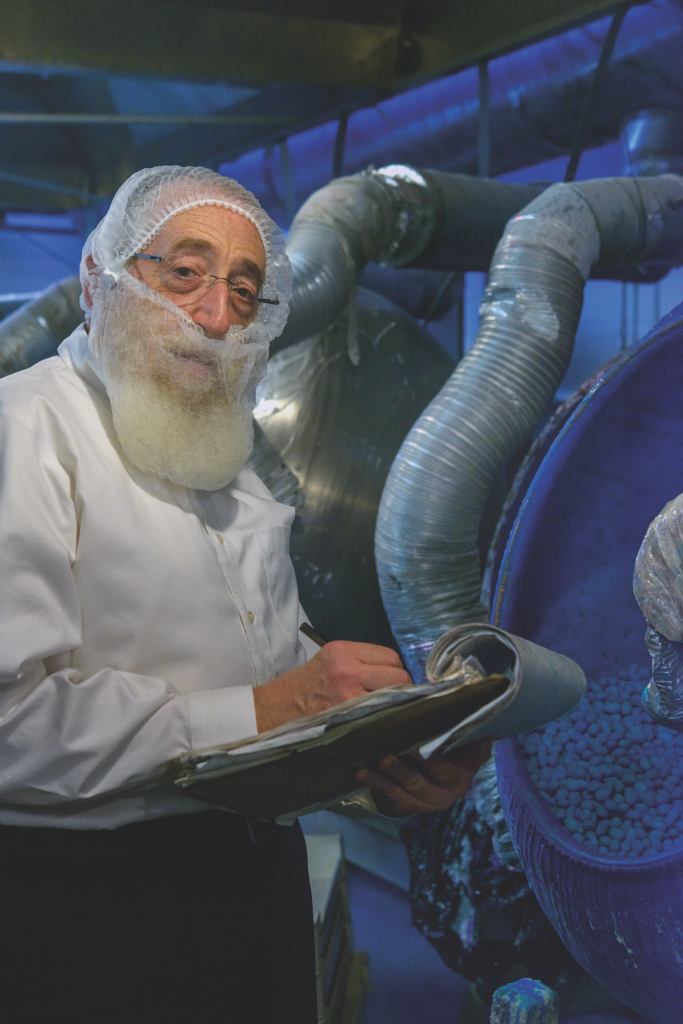 Rabbi Reuven Nathanson’s career as an OU mashgiach can be summed up with the motto “Always put your best foot forward.”

The Los Angeles–based rabbi was supervising the production of wine in California’s Napa Valley, one of the premier wine regions of the world, when a new client insisted that Rabbi Nathanson and his two OU colleagues press the grapes themselves—with their feet. The vintner maintained that stomping on grapes with feet covered in disposable booties would result in a higher quality wine because feet are softer on the grapes than machinery, thereby reducing the bitterness in the wine. Surely, he asserted, the rabbis, who are key to producing kosher wine, would want a hand—or a foot—in this process.

The three OU mashgichim donned bathing suits and booties and made sure their yarmulkes were securely fastened to their heads. Their legs were then sprayed with nongrain alcohol disinfectant, after which they jumped into three-foot-deep vats that each held over a half-ton of grapes. Then the stomping began. “I’m sure the onlookers were convinced that an episode of ‘I Love Lucy’ was being filmed onsite,” Rabbi Nathanson reminisces.

After a job is completed, a mashgiach generally submits a report to the RC overseeing the company back at OU Kosher’s main headquarters providing details about the particular run. Rabbi Nathanson wrote and submitted his report to his supervisors. Subsequently, he received back a letter stating that the preferred dress code for OU mashgichim, especially for the rav hamachshir (certifying rabbi), is a jacket and tie. Thankfully, the client never asked the mashgichim to stomp on grapes again.

Rabbi Nathanson, OU Kosher’s director of the West Coast region, with a specialty in the wine and grape juice industries, has been with the OU for more than three decades. Inspecting plants in no less than ten Western states, he “fell into” kashrut while working in acute care hospital administration in New Orleans several decades ago. At the time, the OU had one account in the area, about fifteen miles from his job. “Since there was flexibility in my job, and the OU required my services only monthly, I decided, ‘Why not?’” says Rabbi Nathanson.

Other OU Kosher jobs came along, which Rabbi Nathanson accepted. Then two things happened that pushed Rabbi Nathanson toward a career in kashrut: He and his wife wanted more educational options for their children and did not want to send them away from home. And at the same time, the number of OU jobs assigned to him began growing exponentially. Rabbi Nathanson and his family relocated to Los Angeles in 1991, where he again worked simultaneously in hospital administration and for OU Kosher. Eventually, he left healthcare and immersed himself in the world of kosher supervision.

Nowadays, Rabbi Nathanson travels throughout the South Pacific, Mexico, and southwestern and western United States. He flies twice a year to Australia and New Zealand, and multiple times to Hawaii and the islands in the South Seas. He travels mostly on weekdays, returning home for Shabbat and yom tov. Because of his arduous travel schedule, he treasures spending time at home with his wife, children and grandchildren. In fact, Rabbi Nathanson seems to be passing on his love for kashrut to the next generation: one of his sons and a son-in-law are working for OU Kosher.

His perception, focus, and ability to target and resolve kashrut challenges is razor-sharp. Little gets past him.

While her husband’s irregular schedule poses challenges for Chana Lieba Nathanson, it also, she says, gives her a “greater appreciation of my  husband when he’s home.”

What makes Rabbi Nathanson so good at what he does? He’s a “people person,” says OU Kosher RC Rabbi Nosson Neuberger. “He relates well to people; they don’t feel that he’s just there trying to get the job done.”

Other colleagues say that Rabbi Nathanson brings to the table two seemingly contradictory qualities that serve him well in this role. “On the one hand, he is always calm, friendly and kind,” says Rabbi Avrohom Gordimer, an RC who has traveled with Rabbi Nathanson extensively, accompanying him on OU plant visits in which they dealt with very intricate scenarios. “Everyone who deals with him feels at ease and really enjoys interacting with him. He works wonders, always managing to set things straight, leaving all parties satisfied and happy. On the other hand, his perception, focus, and ability to target and resolve kashrut challenges is razor-sharp. Little gets past him, and solutions to the most perplexing quandaries emanate from him smoothly and easily.”

Rabbi Nathanson’s good-natured disposition enables him to form friendly and solid connections with plant managers and staff. He was once onsite for an OU Kosher client, when he began speaking with the research and development manager, who was trying to locate an uncommon ingredient. The company CEO passed them en route to a meeting, and forty-five minutes later, after the meeting had ended, he found them still talking. Upon which the CEO said, “How much is this chatting costing me?”

The manager responded: “Hey, the rabbi here is a wealth of information and is actually saving us about $50,000—the cost of having me research the ingredient and then get in samples that in the long run won’t fill our needs.”

Through his work as an OU RFR, Rabbi Nathanson is always drawing upon his keen detective skills to assure the integrity of the products he is supervising. Once, he was wrapping up a job supervising the canning of yams, when an interesting-looking piece of machinery caught his eye. After examining the machinery, he asked the secretary why a cooking kettle on wheels was in the corridor. When she responded that it was there because there was a leak in the closet in her office, something gnawed at Rabbi Nathanson, and he decided to pursue the matter before concluding his job there. He asked more questions and found out that the cooking kettle was used “only occasionally,” according to the secretary, to make shrimp soup. “My heart skipped a beat,” says Rabbi Nathanson. Pushing further in his quest for information and clarity as to when the cooking kettle was used and not used, and whether it impacted the canning process for which the OU was hired, he searched through the company’s ledgers and calendars and determined that the kashrut for the canning of yams was intact.

Even after three decades of nonstop traveling for OU Kosher, Rabbi Nathanson shows no signs of slowing down. “I’ll go where I’m needed. And I’ll help whoever needs help,” says Rabbi Nathanson. “I love what I do.”

Leah R. Lightman is a freelance writer who lives in Lawrence, New York, with her family.