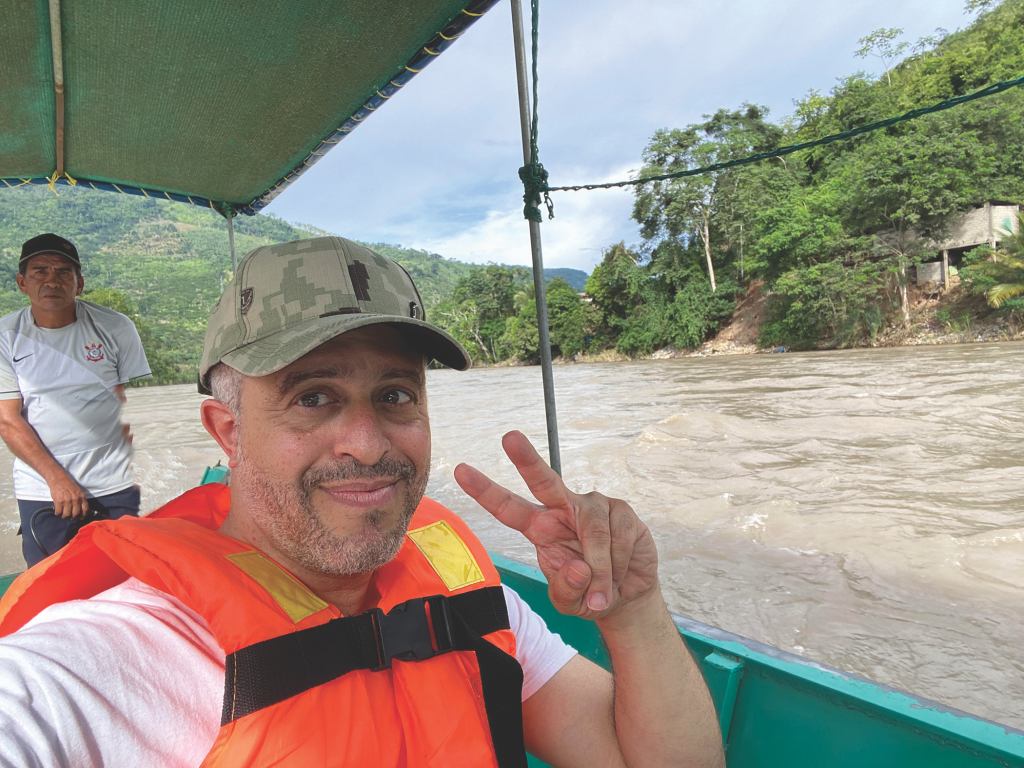 More than the excitement and the breathtaking scenery, Rabbi Ghoori thrives on the joys of connecting South American factory owners to the Jewish market. Courtesy of Rabbi Shoshan Ghoori

For Rabbi Shoshan Ghoori, director of OU Kosher’s Latin America client relations, a run-of- the-mill plant inspection is an Indiana Jones–style adventure. It is not unusual for him to prepare by applying copious amounts of bug spray and donning heavy rubber boots and a netted face mask—all to protect himself from the snake bites, malaria and dengue fever he might encounter while journeying to plants tucked deep in the Amazon.

And those trips can include heart- stopping moments. On one recent visit, the rabbi and his driver spent three hours on a journey that included drives under waterfalls and through mudslides at night. “At times it was very dangerous,” the Brooklyn-born rabbi says. Still, he is enthusiastic about his work.

More than the excitement and the breathtaking scenery, Rabbi Ghoori thrives on the joys of connecting South American factory owners to the Jewish market. “These company owners go to international fairs, but they don’t realize the window of opportunity the kosher market offers for selling in the US. Once a product is selling to kosher consumers in supermarkets on the East Coast, supermarkets elsewhere are attracted to it,” says the rabbi.

Although it’s not part of his job description, Rabbi Ghoori will often take South American factory owners on a tour of Brooklyn’s upscale kosher supermarkets to show them what they are missing. “I’m bringing the jungle to Brooklyn,” he jokes, though the manufacturers tend to be cultured and sophisticated. “We visit Pomegranate and Breadberry, then I’ll take them to a kosher restaurant for lunch.” He estimates that companies he has helped in this way have increased their sales by as much as 30 percent.

Rabbi Ghoori also played a crucial role in the OU’s decision to certify quinoa for Passover; he visited the quinoa fields in Bolivia and Peru and discovered that due to their remote locations in the Andes mountains, quinoa is grown separately from other crops.

Teaming up with local activists, Rabbi Ghoori also helped farmers market directly to consumers at fair prices. Though quinoa was selling for record-high prices on the world market, the rabbi noticed that quinoa farmers were excluded from the bounty by unscrupulous middlemen. “Middlemen are now offering much better prices to the farmers,” he says.

Well connected in countries throughout South America, Rabbi Ghoori is involved in helping his fellow Jews in any way he can. While he’s reluctant to provide details, he does admit that he was instrumental in arranging for Jacob Ostreicher’s escape from prison in Bolivia. Ostreicher, an Orthodox Jew, was unjustly arrested by Bolivian authorities in 2011.

Before coming to the OU, Rabbi Ghoori worked in kiruv rechokim. Having learned at Jerusalem’s Yeshivas Toras Moshe as well as at Beth Medrash Govoha in Lakewood, New Jersey, Rabbi Ghoori spent seventeen years in Santiago, Chile, building the local chapter of Aish. Working with newcomers to Judaism deepened the rabbi’s own relationship with Yiddishkeit. “I myself became a ‘ba’al teshuvah’ by learning about Judaism from that perspective,” he says. During those years, he developed an easy fluency in Spanish, which he attributes to his Yemenite roots—Rabbi Ghoori is half Yemenite and half Ashkenazi. “Yemenites have a sensitivity to language,” he points out.

It is not unusual for him to prepare by applying copious amounts of bug spray and donning heavy rubber boots and a netted face mask—all to protect himself from the snake bites, malaria and dengue fever he might encounter while journeying to plants tucked deep in the Amazon.

When one of his Aish congregants, a factory owner, sought his assistance to kosherize a Chilean anchovy factory, Rabbi Ghoori turned to the OU. Rabbi Rabinowitz, Rabbi Moshe Elefant, COO, OU Kosher, and Rabbi Menachem Genack, CEO, OU Kosher, took him under their wing, introducing him to the halachic complexities of twenty- first-century hashgachah. It wasn’t long before Rabbi Ghoori joined the OU as a mashgiach. When concerns for his children’s schooling brought him back to the US, Rabbi Ghoori continued at the OU. As a rabbinical field representative (RFR), he oversees the work of five rabbis—three in Chile and two in Peru.

Today, his home base is Woodmere, New York, but the rabbi estimates that he spends half a year in Latin America. He is often based in hotels, but when he’s in Chile, he stays with a married daughter who remained in Santiago. While there, he also checks up on the community where he once served as the rabbi. “It feels like [one of my] children to me,” he says.

The trips are busy. Rabbi Ghoori is up at dawn, and right after davening, breakfast and an exercise routine, he’s off. “During my last trip, I visited twenty-five factories in less than three weeks,” he says. “I have traveled with him. He has a lot of energy,” says one of his colleagues.

A natural networker, Rabbi Ghoori often engages with new companies while he’s on the road. “If I see a warehouse or factory, I’ll knock on the door to speak to the export manager,” he says. He estimates that through these spontaneous visits, he’s brought fifty factories under the aegis of the OU. When he’s on the road, he also visits Jewish communities, reaching out to local rabbis to help them with their kiruv projects.

While the fields of kiruv and kashrut share little in common, Rabbi Ghoori feels that the two parts of his career form a coherent whole with the goal of creating a kiddush Hashem.

Carol Green Ungar is an award-winning writer whose essays have appeared in Tablet, the Jerusalem Post, Ami Magazine, Jewish Action and other publications. She teaches memoir writing and is the author of several children’s books.

5 1 vote
Article Rating
This article was featured in the Winter 2022 issue of Jewish Action.