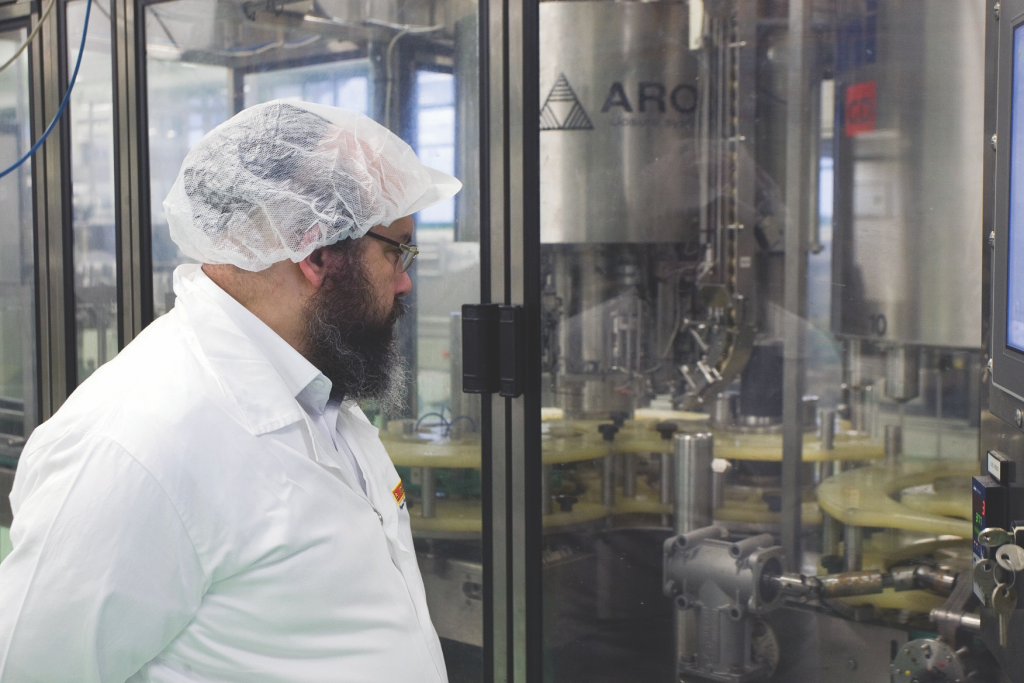 Rabbi Yisroel Hollander supervising a Pesach run of Slivovitz at Rudolf Jelinek in the Czech Republic. Courtesy of Rudolf Jelinek

In a recent email to his colleagues, Rabbi Yisroel Hollander, OU Kosher’s senior rabbinic representative of Europe, describes a week in his life.

Sunday: a two-hour train ride from Antwerp to Paris.

Monday: a factory inspection, followed by a flight to Istanbul and from there to Baku (Azerbaijan).

Wednesday: fly back to Istanbul, and then on to Prague to supervise a Pesach run of Slivovitz.

Thursday: fly to Belgium, conduct another plant inspection, and return home to write up the reports.

Add to this thrice-daily davening and daily Torah learning, which is only natural for a Gateshead Yeshivah alumnus, and you’ve got a recipe for a life that feels overfull. Yet the gentle fifty-three-year-old rabbi is serene. “The OU has been very good to me,” he says. Rabbi Hollander has spent a quarter of a century at the OU, joining after a stint at a kashrut organization in Manchester.

Even now, with airports still in post-Covid chaos and gas prices at nosebleed levels, the rabbi continues on his journeys. “Indefatigable is the word I’d use to describe him,” says Rabbi Nachum Rabinowitz, a senior RC for OU Kosher who has traveled with Rabbi Hollander.

During a recent Zoom interview, Rabbi Hollander described his most recent trip, a midnight flight followed by a more than 400-mile drive to Bulgaria to supervise the manufacture of maraschino cherries, as “nothing—for me, it feels like driving up the road.”

Though he’s a devoted family man, Rabbi Hollander admits that he spends more time on the road than he does at home. “I can go a whole week without a warm meal because I travel to areas without kosher food,” he says. Oftentimes, his meals consist of cheese and crackers or salami sandwiches. Yet the rabbi seems immune to the stresses of traveling. “He’s always smiling and he’s pleasant to work with,” says Rabbi Hillel Kusmierski, an OU European RFR who works closely with Rabbi Hollander and considers him a mentor as well as a close friend.

Even now, with airports still in post-Covid chaos and gas prices at nosebleed levels, the rabbi continues on his journeys. “Indefatigable is the word I’d use to describe him,” says Rabbi Nachum Rabinowitz, a senior RC for OU Kosher.

“He often sleeps in his car,” says Rabbi Menachem Genack, CEO, OU Kosher. Rabbi Genack was once traveling to meet Rabbi Hollander in Amsterdam for a factory visit. When Rabbi Genack travels to certain European countries, he prefers to wear a baseball cap so as not to draw attention due to rising anti-Semitism. However, when he landed, Rabbi Hollander was in the airport waiting for him, dressed in Chassidic garb. “You’re ruining my camouflage!” Rabbi Genack cried.

Being multilingual helps Rabbi Hollander communicate as he crisscrosses Europe. Born and raised in the UK, the Antwerp-based rabbi is fluent in six languages—Hebrew, Yiddish, English, German, French and Flemish.

Years of traveling have refined his sensitivity to cultural nuances. When planning random factory inspections—the bread and butter of a mashgiach’s job, in fulfillment of a halachic requirement called “yotzei v’nichnas”—he pays careful attention to the timing and style of the midday meal. “In Spain, lunch goes from 1:00 to 3:00 pm, and there’s nobody to speak to during those hours. In France, it’s 12:30 to 1:30 pm . . .  but in Bulgaria, showing up at lunchtime is no problem.”

Even when the timing is right, surprise visits can be challenging. “Sometimes I have to wait a long time,” says Rabbi Hollander.

Occasionally he will arrive at a plant to discover that his contact isn’t around. “If it happens once, I let it go, but if it happens regularly, I report it to the OU and sometimes the hashgachah is retracted,” he says. Even when his contacts are there, the welcome the rabbi receives varies greatly across borders. “In France, no one offers food or drink, but in Germany, they put out drinks and fruit,” he says. “Bulgaria and Eastern Europe are also very friendly, and in the Czech Republic they are so proud of their kosher Slivovitz that they interviewed me on Czech television.”

While inspections of plants that are in the process of going kosher tend to be friendlier than regular visits, the latter visits have their own kinds of glitches. “The most common is failing to report a new ingredient,” says Rabbi Hollander.

Even when he receives a nice welcome, Rabbi Hollander still has to contend with plant managers who don’t understand Judaism. “They think the rabbi comes to bless the food. They don’t understand that we follow these rules in our own lives. After a two- or three-hour conversation about kosherizing the plant, some managers will offer me a non-kosher lunch,” he says with a chuckle.

Carol Green Ungar is an award-winning writer whose essays have appeared in Tablet, the Jerusalem Post, Ami Magazine, Jewish Actionand other publications. She teaches memoir writing and is the author of several children’s books.