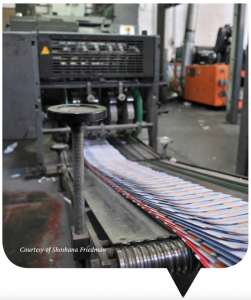 A quarter of a century ago, if one wanted to get an inside look into the more traditional circles of the Orthodox community, one would have to rely on hearsay or a very occasional news story in a secular daily or weekly Jewish newspaper. That kind of story aroused a mixture of pride, surprise and validation, precisely for its rarity. Even then, the chances of such a story capturing the nuances, or even being factually correct, were iffy.

No more. In fact, if one were to read every English-language Chareidi Orthodox publication today, one would have little time for anything else. Hundreds of pages are published weekly. I am not even counting the occasional, high-quality kashrut newsletters and yeshivah publications. It all boils down to this: Given the halachic aversion to television and other forms of mass communication, the last bastion of readership for financially healthy, community-validated print journalism today is the Orthodox Jewish community. To all appearances, the Chareidi publications seem to be on solid financial footing. While print journalism appears to be struggling for its survival, the Chareidi Orthodox Jewish press is flourishing.

At first glance, these Chareidi publications might seem to be overwhelmingly similar. In fact, they have marked differences, testifying to the reality of diverse subsets within the Chareidi Orthodox community. In fact, to speak of a single Chareidi community is very much an outsider’s perspective, given the marked internal differences. Each Chareidi subset has its own publication, though to be sure, there is overlap.

A brief run-down of the major Chareidi publications, highlighting both similarities and differences:

Yated Ne’eman, a newspaper of upwards of 200 pages weekly, founded in 1987, is primarily the voice of the so-called Litvish, Lakewood yeshivah-type community—though, to be sure, the news pages embrace Chassidim and Sephardim as well. Yated hosts a chinuch forum; a shidduch forum; a psychologist’s forum; a forum for halachic queries; weekly essays on the parashah; profiles of great rabbinic eminences, living and dead; much general national and world news; columnists from the secular press; a robust letters page, including personal comments that have nothing to do with what has been published; photographs of rabbinic eminences and noteworthy events, such as weddings; and a variety of related features, long and short, as well as a small magazine with a children’s section. Its community news from around the country, but especially from Lakewood, New Jersey and similar communities, is detailed and carefully researched. Yated projects a definite point of view. For example, if it feels that left edges of the Orthodox Jewish community have left the fold, Yated will bluntly scrutinize and criticize the development.

While print journalism appears to be struggling for its survival, the Chareidi Orthodox Jewish press is flourishing.

The English-language Hamodia, established in 1998, is both a small daily newspaper—the only English-language Orthodox daily—and a much larger weekly newspaper. The weekly comes with many sections: a magazine, hard news, community news, features and opinions, rigorous reportage on developments in health and a children’s section. Hamodia seeks to represent the entire spectrum of the Orthodox Jewish community—Litvish, Chassidic and Sephardi—and to identify the events and perspectives in Orthodoxy that unify it. The publication strives for solidarity and to provide “newsworthy and ethical reading material” to ensure that readers are not exposed to material deemed inappropriate. Hamodia presents various events from within the Modern Orthodox Jewish community as well. Hamodia’s hard news section is highly professional. Its magazine contains a fascinating range of features and often focuses on Orthodox Jewish artists and relatively unknown communities and Orthodox pioneers, past and present. Hamodia also publishes a high-gloss weekly magazine, Binah, written by and for women.

The English-language version of Mishpacha, which first appeared in 2004, is a full-color weekly magazine with features, profiles, influential columnists, and Jewish and general news. The writing is first-rate. Often, to read Mishpacha is not only an educational experience but a literary one. What distinguishes Mishpacha is its agenda to tackle sensitive issues that, a quarter of a century ago, were mostly hushed up. I was particularly moved by a recent feature about a family that had lost a child to a drug overdose. In past years, everything about this topic would say, “Stop. Don’t write.” The author, with the obvious cooperation of the family, carefully illustrated every stage of defeat and every potential stage of turnaround within this tragic life. It was vintage Mishpacha, though, of course, many of the topics that Mishpacha deals with are far less severe, if still vitally important. Mishpacha publishes a weekly family supplement and a children’s magazine.

Ami Magazine, founded in 2010, is another glossy weekly with superior graphics and design that takes the Mishpacha approach to sensitive issues, but pushes the envelope. Its editor is an excellent interviewer who is able to extract facts that his subject might prefer to disguise or hide. At the same time, Ami looks for the positive within any obviously negative news about Orthodox Jews. Ami’s family supplement, though full of “softer” features, addresses sensitive medical issues. Ami includes a children’s section, an advice column, a language column, a parnassah feature and essays on Jewish themes and current events. Some consider Ami sensationalistic. That perspective may reflect the remaining reluctance within the Orthodox community to confront troubling issues with the same frankness that we expect from the public press in its treatment of issues of public concern. Both Ami and Mishpacha publish anonymous accounts from people with fascinating, tragic or instructive but embarrassing personal stories. 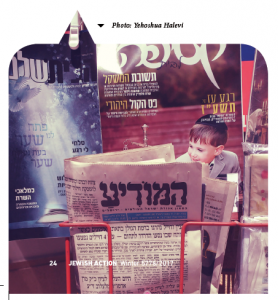 Within the confines of its religious outlook and lifestyle, the Chareidi press in its diversity testifies to the difficulty, and perhaps the pointlessness, of the use of labels to define the growing Orthodox Jewish community. As more of the total Jewish community becomes halachically observant and theologically committed, it is only natural to expect a renewal of the great diversity that historically defined the pre-Enlightenment Jewish community. When, in the years immediately after the Holocaust, the American Orthodox Jewish community was small, isolated, uninfluential and struggling to survive, it was only natural to expect it to be largely homogenous. Those days are long gone. The burgeoning Chareidi press reflects the dramatic changes that have taken place in the contemporary Orthodox world.

Rabbi Hillel Goldberg is editor and publisher of the Intermountain Jewish News. He is also a contributing editor of Jewish Action.