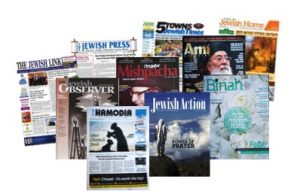 The explosion in English-language Orthodox print media is a wonderful development, especially for those of us who recall the days when Orthodox print publications were few and far between. These days there’s a plethora of newspapers—(even a daily!)—as well as a variety of glossy, graphically appealing magazines (and even classy, high-style fashion magazines geared for the frum, modestly dressed woman.)

In most heavily Orthodox neighborhoods around the country, one can also find an assortment of local freebies—weeklies such as The Five Towns Jewish Times, The Flatbush Jewish Journal, The Jewish Link of New Jersey or The Jewish Home LA. Some more Modern Orthodox in orientation, others more right leaning, these popular weeklies with a “small town” appeal tend to reflect the unique flavor of their particular community. Serving as a unifying force, many of these publications have readers spanning the Orthodox spectrum, invariably exposing them to Torah ideologies and hashkafot that may be different than their own.

In the Orthodox world, print is not going away so quickly. Publications—from national magazines to local weeklies—irrespective of their ideological slant, are clearly thriving, indicative not only of a growing Orthodox press, but also of the dynamism and vitality of contemporary Orthodox life.