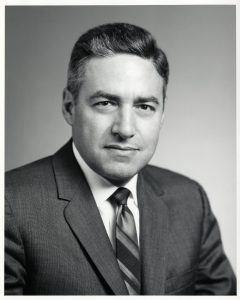 The future for Orthodoxy Jewry looked bleak when Moses Feuerstein began his twelve-year tenure in 1954 as president of the Orthodox Union. World Jewry was still reeling from the Holocaust. The non-Orthodox movements were strong and growing. The Orthodox day school movement was in its infancy, struggling to find students. On shaky ground, Orthodox Judaism questioned whether it would ever flourish in America.

Undeterred and equipped with the belief that Torah must pervade all areas of life, Feuerstein spearheaded the planting of seeds that were ultimately responsible for the vibrant American Orthodox Jewish life we witness today. As the late OU Honorary Past President Rabbi Joseph Karasick wrote upon Feuerstein’s passing: “By great fortune, Moses I. Feuerstein appeared on the scene and, knowingly or not, created a tsunami.”

Under Feuerstein’s leadership, the OU founded NCSY, a youth movement that changed and continues to change the face of the American Orthodox landscape. Recalling the opposition Feuerstein and other lay leaders in support of NCSY faced, Bernard Lander, who went on to establish Touro College, wrote:

At the [OU] convention, the New York City delegates were skeptical [about the resolution to create such a movement], but the delegates from out of town were outspoken and enthusiastic. One by one they rose to tell of how badly they needed such an effort, of how Orthodox Judaism would not survive in their communities if it did not happen.

The OU’s new President Moses Feuerstein weighed in, as we knew he would, with his strong support, reminding the cynics that his father Samuel had faced similar criticism when he started Torah Umesorah a decade earlier.

By establishing this much-needed youth group, Feuerstein and other supporters succeeded in bringing about a revolution, transforming the lives of thousands of teens as well as entire families and communities. Similarly, during his tenure, he laid the groundwork for OU Kosher, enabling it to become the largest and most respected kosher certification agency, today certifying over one million products in more than 13,000 plants worldwide.

Through Feuerstein’s vision and efforts, Orthodox Jews moved to the forefront of Jewish communal life, among other arenas. Statesman-like, Feuerstein led by example.

Feuerstein strongly believed that rather than isolate themselves from the rest of the world, Orthodox Jews should reach out and build bridges and liaisons with other community organizations and leaders. His efforts resulted in the OU becoming active with other communal organizations such as the Conference of Presidents of Major American Jewish Organizations, the National Jewish Community Relations Advisory Council (now called the Jewish Council for Political Affairs), the Federation of Jewish Philanthropies (which later merged and became UJA-Federation of New York), local Jewish community councils and so many others.

“Under his watch, the OU gained  purpose and meaning, and Orthodoxy in America became a viable possibility when it hadn’t been for so many years,” Zev Eleff, an expert in the field of American Jewish history, wrote when Feuerstein passed away in 2009 at the age of ninety-three.

Through Feuerstein’s vision and efforts, Orthodox Jews moved to the forefront of Jewish communal life, among other arenas. Statesman-like, Feuerstein led by example, always publicly wearing his yarmulke at a time when this practice was uncommon.

Feuerstein was also able to relate to the diverse segments of the Orthodox world. As OU Honorary Vice President Michael Wimpfheimer recalls, “He was close to many of the gedolim at that time. He had a very strong connection to Rabbi Joseph B. Soloveitchik and he had close relationships with Rabbi Aharon Kotler and Rabbi Yaakov Kamenetsky. He was also active in Torah Umesorah. He had close friends in all circles of the Jewish world.” During Feuerstein’s administration, the Rav was appointed as the OU’s official posek, providing halachic guidance to OU leadership on a range of complex social and political issues.

In a tribute to Feuerstein, Rabbi Karasick recalled that “when the Roman Catholic Church’s Vatican II reversed longstanding anti-Semitic teachings, there was a big push for interfaith dialogue. But the Rav felt strongly that discussion between Christians and Jews should be limited to nonreligious subjects, and Moe and the Orthodox Union followed the Rav’s directive.”

Feuerstein’s leadership training commenced as a child in Boston. He learned firsthand about klal work from his father Samuel, a textile industrialist who served in a number of Jewish leadership positions and was the founder of Torah Umesorah.

Moses Feuerstein (right) with his father Sam Feuerstein at the 1989 RIETS dinner in Boston, where the family was honored. Courtesy of Yeshiva University Archives

His commitments on the national Jewish scene notwithstanding, Feuerstein was intimately involved with Orthodox Jewish Boston. He and his wife Shirley, together with the extended Feuerstein family, were the backbones of the Young Israel of Brookline and supporters of the Rav in building Boston’s Maimonides School. Many university students passing through Boston during that time period were welcomed into the Feuerstein home for Shabbat and Jewish holidays and Feuerstein made himself available to speak with those who sought his advice.

“[The Feuerstein home] was a home away from home for hundreds upon hundreds of college students who attended the renowned academic institutions in the area,” wrote OU Honorary Past President Rabbi Julius Berman.

A graduate student in Boston in the early 1970s, Chaya Levine remembers exploring the idea of launching a chesed project on college campuses. “There was no doubt in my mind that Moses Feuerstein would be the best person to discuss the details of what we were trying to do,” she says. “His understanding of the Jewish world, his focus and attention to detail remain an inspiration to me today.”

After being re-elected to his third term as OU president, he traveled throughout North America trying to fortify Orthodox communities, large and small, strengthen mechitzot in Orthodox shuls, and engage in dialogue with the spectrum of Orthodox Jewry in order to inspire and bolster their growth.

“He viewed himself as a spokesman for Yiddishkeit,” says Wimpfheimer.

Leah R. Lightman is a freelance writer living in Lawrence, New York, with her family.