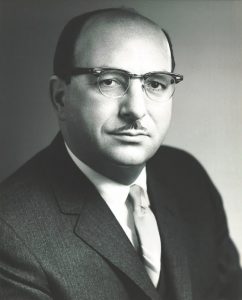 Over the years, much has been written about Rabbi Joseph Karasick, a visionary who dedicated his life to strengthening Orthodox Judaism in the United States and beyond. Stepping into a void that existed in the late 1950s, he became a member of the OU’s Board of Directors, the start of a lifelong commitment to the organization that continued until his passing in August 2020 at the age of ninety-eight.

While Rabbi Karasick’s tenure as president of the OU is remembered for his many accomplishments, his appointment in 1966 was by no means expected. At age forty-four, he was considered young for the position, which he attained because of his close relationship with the previous OU president, Moe Feuerstein. During his six years as president, Rabbi Karasick invigorated the OU, recruiting younger people, including individuals such as Rabbi Julius Berman, Larry Kobrin and Fred Ehrman, all of whom are well known today for their contributions to Jewish life. He was also responsible for arranging the World Conference of Synagogues in Jerusalem, positioning the OU as an international voice for Jewish affairs.

He steered the OU through its significant role during Israel’s Six-Day War, organizing a massive rally in Washington, DC, which had American Jews expressing their support for Israel and calling on President Lyndon Johnson to pledge his assistance to the Jewish State. It was also during his presidency at the OU that Rabbi Karasick undertook what he later considered to be one of the greatest achievements of his life—helping French Jews remain connected to their religious roots.*

While strengthening Orthodox Judaism was a high priority for Rabbi Karasick, that effort wasn’t without its challenges.

After stepping down as president, Rabbi Karasick became chairman of the OU’s Board of Directors, continuously expanding the organization’s scope. He invested considerable efforts into growing NCSY into a major powerhouse in the world of kiruv, taking its efforts as far west as California and northward into Canada. Rabbi Karasick focused on broadening Orthodoxy globally and strengthening ties between Jewish communities all across the world, those efforts making it clear that the OU’s reach extended far beyond American shores. He was passionate when it came to ensuring that synagogues continue evolving in contemporary times without compromising on the tenets of Jewish law, endowing the Pepa and Joseph Karasick Department of Synagogue Initiatives. Today, the department provides a wide array of support mechanisms that allow synagogues and Jewish communities throughout North America to grow and prosper.

While strengthening Orthodox Judaism was a high priority for Rabbi Karasick, that effort wasn’t without its challenges. His son George recalled one instance when a group of Midwestern synagogues, located mostly in the Chicago area, wanted to become members of the OU’s network of synagogues. While their services were technically Orthodox and men and women sat separately, the synagogues had no mechitzot, creating a very real dilemma for Rabbi Karasick. On the one hand, how could an Orthodox shul not have a mechitzah? On the other hand, adding several thousand new members to the OU would create the potential to grow Orthodoxy even further.

As he had on so many other occasions in his life, Rabbi Karasick reached out to his rabbinical authority, Rabbi Joseph B. Soloveitchik, for guidance and was instructed to call Rabbi Ahron Soloveichik, who was living in Chicago at the time. “Rav Ahron told my father, ‘Don’t do it, they will come around eventually,’” says George. “My father didn’t accept them as members, and the shuls that stood the test of time ultimately put in mechitzot. It was an interesting case at the time because Orthodoxy wasn’t flourishing as it is today, so the thought to include them was tempting.” 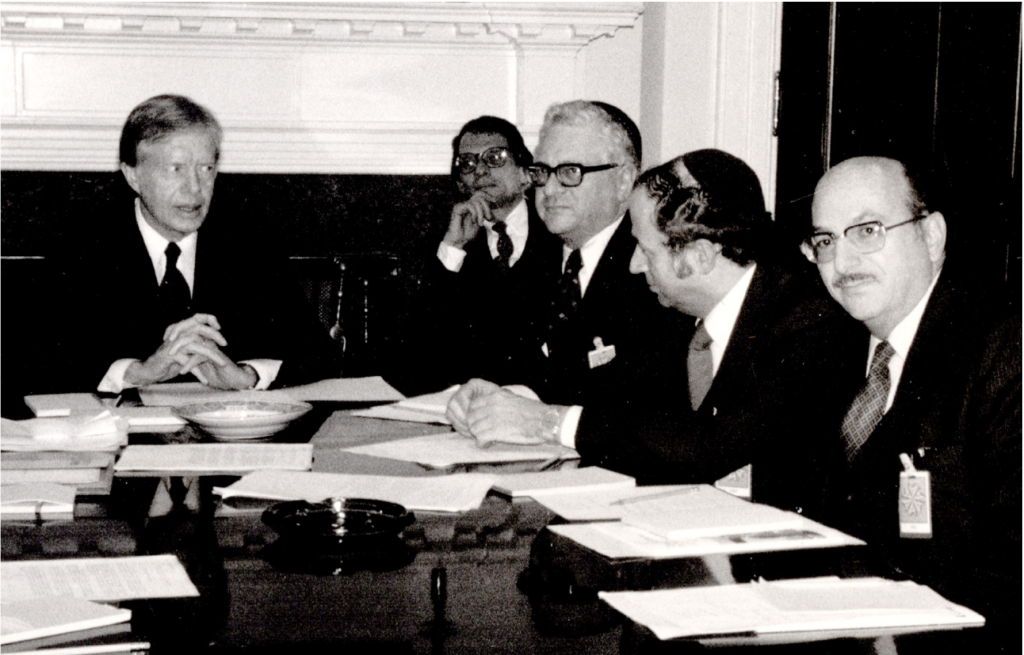 Rabbi Joseph Karasick meeting with President Jimmy Carter as part of a delegation of the World Jewish Congress-North America (WJC-NA), circa 1978. From left: President Jimmy Carter; Dr. Israel Singer, Secretary General of WJC-NA; Herb Berman, officer of WJC-NA; Rabbi Julius Berman, president of the OU at the time; and Rabbi Joseph Karasick, OU chairman of the Board and former OU president. Courtesy of Mark Karasick

In addition to his decades of advocacy on behalf of Orthodoxy, Rabbi Karasick was extremely dedicated to the rabbanim in his life. After being asked in 1969 by Rabbi Yechezkel Abramsky, head of the Vaad HaYeshivot at the time, to speak with Israeli Prime Minister Levi Eshkol about a possible plan to draft yeshivah students into the army, Rabbi Karasick jumped into action. He arranged a meeting with the prime minister and was able to convince him to let the students remain in yeshivah.

As someone who also took on key roles at Yeshiva University, the Conference of Presidents of Major American Jewish Organizations, the Beth Din of America and the International Jewish Committee on Interreligious Consultations, Rabbi Karasick was a strong believer in personal involvement and had little patience for spectators who opted to sit on the sidelines. Instead, he preferred to see people getting into the trenches of communal life, whether it was on the local, national or international level. And while others might have chosen to step back and enjoy a well-deserved break after decades of activism, Rabbi Karasick chose to remain in the loop even after he hit ninety. “He was getting called into OU meetings in the last year of his life,” says George. “Even then, he was still getting nachat from the OU.”

* Much of Rabbi Karasick’s life accomplishments are found in his autobiography: Thirteen Steps: Orthodox Judaism in America Comes of Age: My Life and Times (OU Press, 2017).